If you’ve checked out my Writing page, you’ll see that I’ve posted a description and links to a working draft for Falling: Dark Angel Book 1. 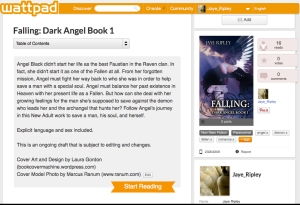 If you’re unfamiliar with Wattpad, it’s a social media site aimed directly at writing and reading. People who log on there can post their writing for all to see. There are multiple genres featured, although some get more attention than others. On average, the audience tends towards the younger reader of YA, and romance does very well as does fan fiction.

So what is someone who’s writing a New Adult paranormal romance doing posting my work for free on the site? My reasons for posting on Wattpad include wanting to give a free sample of my writing. Since I’m a new writer with no track record, it’s an easy way for people to try out my writing and see if they like it.

Another reason for writers like me to try it is the immediacy of response. If someone reads it and leaves a comment, I can get their thoughts about the story before submitting more chapters. In some ways, it acts as beta reading.

All rights remain with the writer, so it is possible to take the draft, get it edited, and self-publish it later on. The work remains on Wattpad, so there will always be a free version available. And now, Wattpad is starting a crowdfunding service they call “Fan Funding” which is in beta testing right now with only three projects, one that’s been fully funded so far. So the possibilities of taking work posted on the site further is expanding.

It should also be noted that there are several people who posted stories on Wattpad that have scored publishing deals. Abigail Gibbs got a deal with her work originally posted as Dinner With A Vampire: Did I Mention I’m Vegetarian that turned into The Dark Heroine: Dinner With A Vampire. Another teen writer, Beth Reekles, signed with an imprint of Random House for her YA writing posted on Wattpad. Simon & Schuster signed Brittany Geragotelis for her work Life’s a Witch. A google search can turn up more like these writers, and the trend tends towards writers of YA.

In perusing through possible works to read, I found published author Cory Doctorow on Wattpad. He has several of his science fiction books posted for free. Margaret Atwood has done the same. So the site isn’t just for those who write for fun or those who are hoping to get published. It’s also being used by those already established who want to share their work for free with more people.

Of course, a huge benefit to posting writing for free is the marketing side of things. I won’t lie and say that I don’t hope to pick up some fans of my writing so that when I publish stuff, they might be willing to purchase it. Of course, I hope that some readers might start with me at my beginnings and stay with me on my writing journey all the way. And maybe they can help me become better.

I’ve only been posting for a few days, but I’ve managed to get three chapters up and running for Fallen: Dark Angel Book 1. I hope to post a short YA piece that I’ve had saved on my computer for a while sometime soon. But for now, I am enjoying the community of writing as well as finding new pieces to read. I’m having fun, and as a writer it’s good to enjoy the process!

6 thoughts on “Why Wattpad? Posting A Story For Free”